14.07.2016
Your Ultimaker is too noisy? Bring peace and harmony back in your living room with 3D printed noise dampening feet.

3D printers can be quite noisy. Besides a full encapsulation that might also proof valuable if printing ABS there are other ways to lower the volume. One is to reduce the vibration that is transferred from the moving parts of the printer to its case and from there to the table which resonates and, depending on size and material, is likely to subsequently work like a noise amplifier.

This effect can be reduced with noise dampening feet. There are a already lot of dampening feet designs available on Thingiverse or YouMagine so there is no need to design a new one. The Damping foot UM original by Kees de Ligt looks promising. 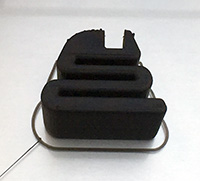 The first foot printed well with black REC filament using 0.15mm layer height, 0.8mm shell thickness, 35% infill, support, and with the square side facing the print bed. I use “hotter than normal” settings for the REC PLA: 215° noozle and 70° bed temperature. These temperatures provide nice prints and good platform adhesion with the REC filament. After that I got lightheaded and tried to print the remaining three feet all at the same time. While this is usually not a big deal, the REC PLA filament consistently turns out to be somewhat picky. Too much cooling time between the layers and the prints tend to fail. 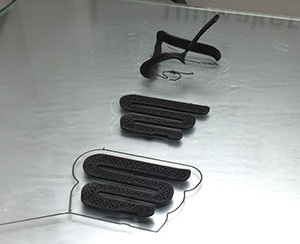 Heavily warped edges on the bottom-most print. The first layers of the dampening foot in the middle look ok. But the top-most foot has been utterly destroyed. You’re on the lucky side if you notice such failures early enough to abort the print and, thus, avoid wasting material.

As I took a closer look at the dampening foot that was printed first, I realized that I would need two of the feet “as is” and another two feet mirrored at the y-axis. Only this way all four feet would face the same direction when attached to the printer. So, I should be thankful that the simultaneous print of three feet failed since that would have produced two unmirrored feet. You can easily mirror objects at all axes in Cura: Click the object then hit the mirror button on the bottom left and click on of the Mirror X/Y/Z buttons.

The remaining one foot as well as the y-mirrored two feet print like a charm. Attaching the feet is easy: Lift one corner of the printer and push the corresponding foot underneath this corner. Repeat with all other corners. Done.

[Update] There is definitely a damping effect resulting in a less noisy soundscape. Good! But after a couple of prints the two rear feet have been tightly compressed so the curvatures of the snake-like construct touch each other. Hence, the damping characteristics of the rear feet are lost. Reason: The 35% infill and 0.8mm outer shell thickness are to weak to support the heavy rear part of the Ultimaker. Solution: Using 1.2mm outer shell thickness and 90% infill yields a new “as is” rear-left foot, and a new y-mirrored rear-right foot that are of heavy duty quality and now easily support the Ultimaker’s rear side.